Once again it’s been a while since the last Plasma Mobile update was published, but as always that doesn’t mean nothing happened. 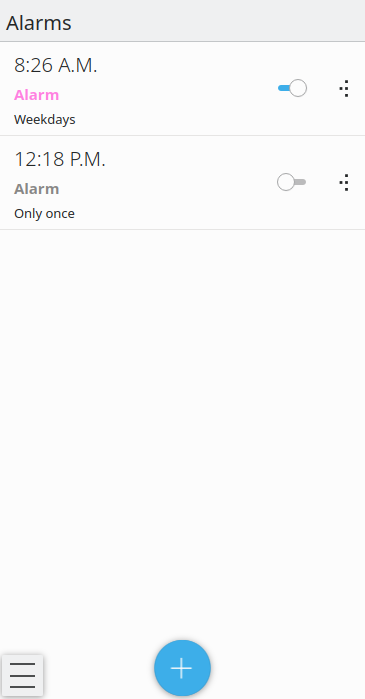 Development has been ongoing for several months and basic functionality is working now. The first stable releases of these will come after Plasma 5.20.

As you would expect from any self-respecting clock app, it allows you to:

It also features a plasmoid that you can add to your home screen.

The first stable release with basic functionality was tagged a few weeks ago!

In the future, more work will be done on making it more tablet/desktop friendly and adding more plasmoids for the home screen. 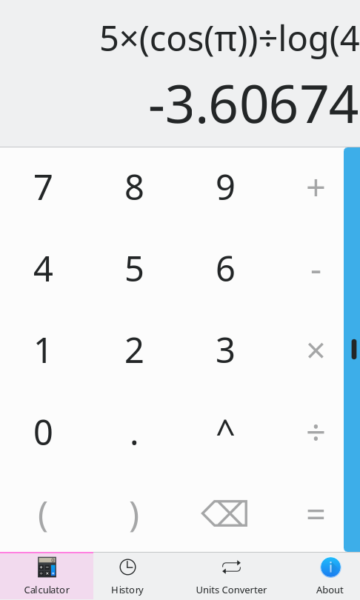 Another new app worth mentioning is Kalk: a calculator with unit and currency conversion functionality. With a math expression parser written with GNU Bison and flex, Kalk is still in early alpha stage.

Angelfish now uses the same scrollbars that other apps use, replacing the previously used scrollbars provided by Chromium. Confirmation dialogs now feature a cancel button, because the effect of closing the sheet by tapping outside it was too unclear. Opening links from other applications now opens a new tab in the existing instance instead of launching a new instance.

Besides the user-facing improvements a lot of internal cleanup has been done. Angelfish now makes better use of KConfig’s abilities and avoids unnecessary page reloads and the internal webapp runtime now shares more code with the main browser. 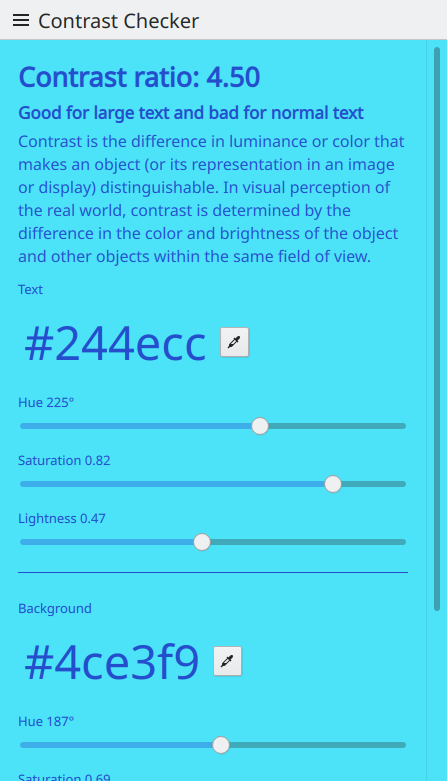 Kontrast is a new application made by Carl aimed at developers and designers. It allows experimenting with different colors and their contrast ratio, which is important for designing accessible user interfaces. It also allows you to generate and save color sets with good contrast. 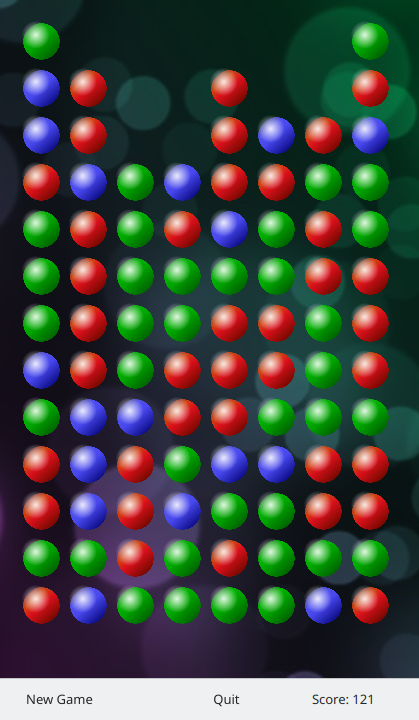 Carl also revived one of the oldest Plasma Mobile demo applications, ported it to Kirigami and added shiny high-resolution textures. 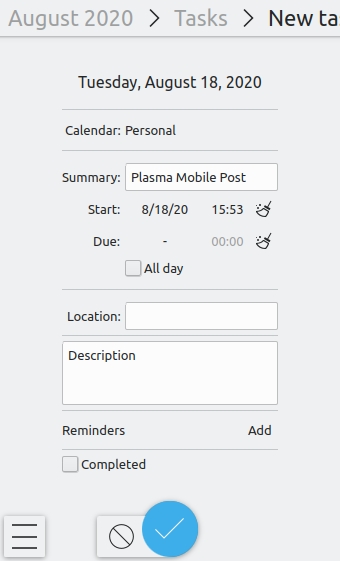 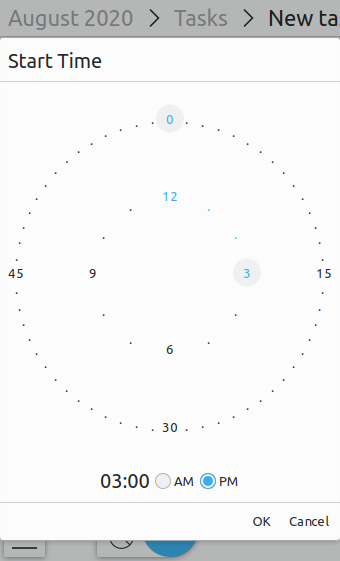 A mobile-friendly file dialog has finally landed in xdg-desktop-portal-kde, making it available for apps using xdg-portals, like Flatpak’d apps. How to support apps not using portals is still being discussed.

Lots of smaller improvements have gone into Alligator recently, mostly improving the usability and polish of our feed reader. One significant improvement, which was surprisingly hard to achieve, was making sure that images would be limited to the width of the application. The work on this is still ongoing, since it requires modifying the feed’s content in specific ways, which have yet to be figured out for some rss feed engines (looking at you, wordpress).

Akademy 2020 has been added to the Kongress conference companion application. So, this year you will be able to organize your Akademy schedule on a mobile device running Plasma using a Kirigami application! 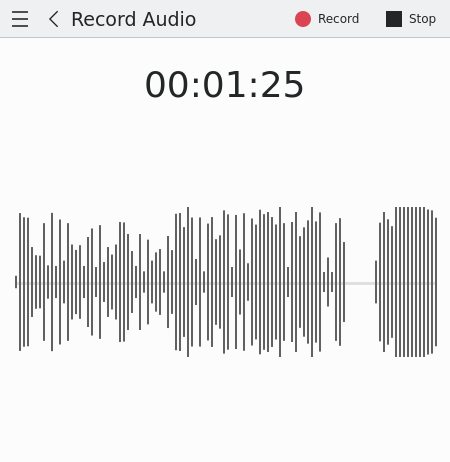 Devin implemented a new audio visualization, which is displayed while recording and while playing existing recordings using the new integrated media player.

The Settings page was reworked to only display the settings relevant to most users by default, while providing more advanced settings if needed.

While many desktop specifics settings modules get ported to Kirigami and Plasma Mobile, some new mobile-specific settings modules are also developed. This time a cellular network module was added by Dimitris to get information about the SIM Card, modem, and carrier registration.

Scrolling in the “info” settings module was fixed by Jonah.

The plasma mobile version of KDE connect was also improved and it is now easier to use, thanks to multiple small visual and usability fixes. For example, it is now possible to refresh the list of devices by pulling it down, and it is no longer possible to accidentally switch page when using the remote touchpad plugin. 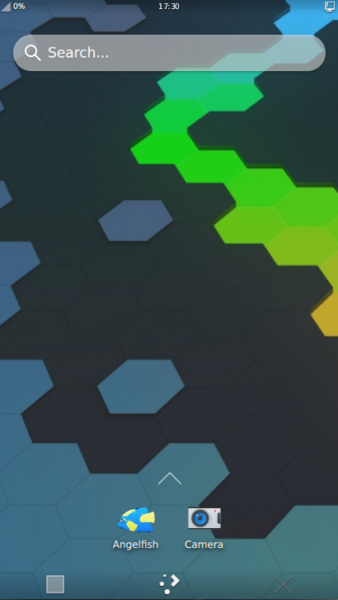 Thanks to Marco’s work, the shell user interface has gained many improvements. Already running apps are now activated instead of starting a new instance when tapping them on the homescreen; the app splashscreen and the panels are now colored according to the app’s icon; and the task switcher has gained many usability improvements.

Thanks to Aleix’s work, the task switcher now shows thumbnails of the running application and the search field also gained a new look.

Devin has worked on refining the lock screen. It now allows swiping up to reveal the PIN entry field and darkens the background to make the controls more legible.

Most developers have received or bought Pinephones by now and are no longer focusing on the Nexus 5X hardware. Therefore focus of the “core team” has shifted and no new Neon image for Halium based devices (liberated Android phones) has been published since February. Simon started an effort to port the image generation to use debos just like it’s being used for the Pinephone images. There are some EGL/library loading issues remaining however and he may not have time to fix them soon. Please join the Matrix channel if this is your thing!

On a brighter note, Erfan managed to write a kwin backend for Halium 9, theoretically allowing Plasma Mobile to run on much newer Android hardware.

Bhushan Shah will be giving a talk at the Linux Plumbers Conference 2020 - Application Ecosystem MC about Plasma on Mobile devices this Friday. This event will be live-streamed on YouTube. We are also organizing the BoF session on Plasma Mobile during the KDE Akademy.